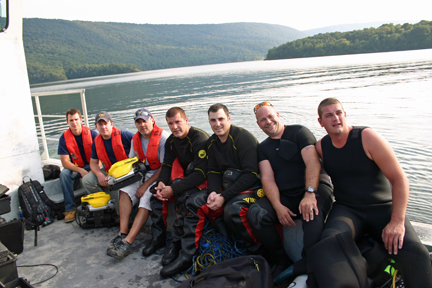 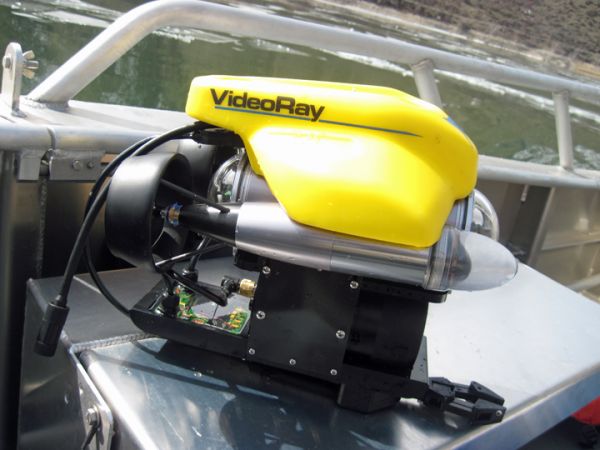 VideoRay got the call for assistance on Monday morning August 20th. Brian Hunsicker from the Marklesburg, Pennsylvania Fire Rescue squad had heard of the VideoRay Remotely Operated Vehicle (ROV) through nearby tech firm KCF Technologies, manufacturer of the VideoRay ROV Smart Tether positioning system. Their agency, along with the Pennsylvania State Police and numerous dive rescue squads from the area, had exhausted their search efforts over the last two days trying to locate a 16 year old who had disappeared the previous Saturday on Raystown Lake in central Pennsylvania. 16 year old Clay Bishop had jumped off a 27 foot cliff at the lakes edge, and had not resurfaced. Water at the site ranged from a few feet to over 100 feet deep. Authorities were immediately notified and began searching with divers, but the extensive search was not successful.

Raystown lake was formed by a dam built in 1978, and the bottom was cluttered with trees and rocks – extremely challenging search conditions. The team used one fully equipped VideoRay Pro 4 system with BlueView sonar and Smart Tether positioning to do a systematic search of the shale rock ledge that extends to the bottom, using the sonar to identify and investigate targets on the bottom. A second system was withheld for backup in case of an entanglement.

After arriving at the Raystown Lake visitor’s center Tuesday morning, the VideoRay staff was debriefed by Hunsicker and Pennsylvania State Police Troopers about the last known point of entry, cadaver dog “hits”, and diver reports of the underwater conditions. The Army Corps of Engineers, Baltimore District which maintains operations at the lake provided their barge as a work platform for the ROVs.

VideoRay ROV operations started at approximately 12:45 pm, with Brett Kolb piloting the first submersible and Shawn Devlin providing tether support. Conditions along the stepped rock ledge were extremely difficult as he navigated the jagged rock outcroppings and submerged timber clearing sonar targets to the bottom. Since his unit did not need to be withheld, Luzzi launched the second VideoRay Pro 4 submersible and started his own search pattern directly under the jump point off the cliffs. On his fourth dive he located the victim on a 6 foot wide rock ledge at a depth of 58 feet, less than an hour after the first ROV was splashed.

The team decided not to attempt to lift the victim with the ROVs manipulator arms, given the chance for snags on the rocks and trees on the way to the surface. Dive rescue teams from Mount Union and Newton-Wayne fire companies were called to conduct the recovery. The ROVs settled next to the site with their bright LED lights on so all the divers had to do was follow the ROV tether to the scene while the VideoRay operators provided “eyes” for surface support personnel while the victim was raised and recovered.

The operation proved the value of VideoRay technology in this kind of situation. VideoRay extends our sympathy to Mr. Bishop’s family, and our thanks to the volunteers who managed the search.

Oops, you forgot something.

The words you entered did not match the given text. Please try again.